Galarian Moltres; Making the most of out of Eternatus

##Pokémon - 19
* 4 Crobat V SHF 44
* 4 Eternatus V DAA 116
* 1 Galarian Moltres V CRE 97
* 4 Galarian Zigzagoon SSH 117
* 1 Hoopa DAA 111
* 1 Yveltal TEU 95
* 4 Eternatus VMAX DAA 117
##Trainer Cards - 32
* 2 Viridian Forest TEU 156
* 2 Energy Switch SSH 162
* 2 Pokémon Communication TEU 152
* 4 Boss's Orders RCL 154
* 2 Reset Stamp UNM 206
* 4 Quick Ball SSH 179
* 4 Professor's Research SSH 178
* 4 Great Ball SSH 164
* 2 Marnie SSH 169
* 4 Switch SSH 183
* 2 Pokégear 3.0 UNB 182
##Energy - 9
* 9 Darkness Energy SMEnergy 7
Total Cards - 60
Disclaimer: I run a similar deck as above but slightly varied.
Let's take a look at cards this time instead of a deck but I'll indirectly mention decks and will post a common one. So check it out:
Chilling Reign was just recently released and everyone is already looking to boost their decks for the Standard Rotation (Even current Standard). Now most competitive players already knew about the Moltres V since it was already released in Japan and if you look at many of the deck list from Poke Gyms (Minor tier Pokemon Tourney in Japan) you'll notice almost every dark deck will run at least one of the Galarian Moltres V and for good reason.
Ability: Direflame Wings
Once during your turn, you may attach a [D] Energy card from your discard pile to this Pokémon. You can’t use more than 1 Direflame Wings Ability each turn.
Another great utility Pokemon to accelerate energy especially on Turn 1. Imagine getting 2 energies ready to go on your Eternatus V turn 1 or even turn 2 in one go. The strategy is simple as you can see from the deck list.
A quick play with a Quick Ball to discard a Darkness Energy to grab a Moltres V and then used the ability. Energy switch over to your main attacker and then attach another energy for turn. Bam you're ready to go.
No more having to worry about hammers; Hammers were definitely annoying especially in terms of setting up. With Moltres and Energy Switch, it lowers the stress on setting up as you can easily be able to get them back.
It's just that good!
But wait there's more!

It's amazing in EXPANDED.

If you never played or even played against a Turbo Darkrai deck will get ready to be stomped because Galarian Moltres V will up those decks greatly. Dark Patch will clutch and Weavile-GX will make the most of it. No needing to use Energy switches.

Ability: Shadow Connection
As often as you like during your turn (before your attack), you may move a basic [D] Energy from 1 of your Pokémon to another of your Pokémon.
Paired with Dark Patches, you will no longer need Energy Switches as you can essentially "Energy Switch was much as you want" and that's not all. With the disposal of cards from the BW Era and Up; You will have Darkness Energy out on the board in no time, Cards that can help accelerate such as Max Elixir and even Yvetal from the X/Y series.
Should we be scared of Galarian Moltres V in Turbo Darkrai? Yeah; Should we be scared of it in Standard? Of course, if you're ready to counter a Galarian Moltres V, I hope you're Head count for Hammers are good and get ready to Boss Order's ASAP. 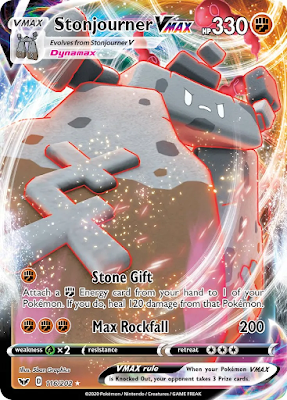