I joined the Digimon craze fairly recently, but that was because of the struggle to find a place that sells them and for a price that won’t break the bank. I also have never joined a tcg tournament or played anyone in any card game besides friends. This did make me a bit nervous when the tournament was starting. What types of players would I go up against? Would I even be able to put up a fight with my hastily strewn together deck? I was also still not 100% on the rules so this was still a learning experience for me.

I was using a red-yellow deck for all my duels(? fights?) with Shine Greymon as the star and a bunch of random cards in the deck that fit the color scheme. I didn’t have a theme like the other decks, but I still wanted to see how I would hold up.

The 1st round I was the most nervous because this was my big debut into the Digimon world. I played against a dude named Sauna who was quite friendly and helped make for a relaxed experience for my first duel. I actually did quite well against him in our first match, but I got a little too excited and suspended all my Digimon, leaving them open to attack. After that I could not recover in time. I managed to get him down to 1 card left in his security stack, so I felt accomplished.

The second match was slightly worse, as I wasn’t getting any of the cards I needed to get set up. I also realized that I tend to attack their security stack without realizing that doing so leaves my guy vulnerable. This combination made for a very defensive game that ended with me ultimately losing. Still got him down to 1 security stack though!

This round felt like it was over before it even started. I played against a kid named Noah who tried being very modest. He said he was a beginner like me but the match soon revealed that it was just to lower my guard. Both matches went very similarly, as he stacked his back row to get a GranKuwagamon within 2 turns. His Mimi tamer card allowed him to keep his back bench ready with Digi-eggs and bring them out whenever he wanted. These were very 1 sided matches. The second match lasted all of 3 turns each. He managed to get out 2 GranKuwagamon and take out 6 security cards in 2 turns. I never stood a chance.

The last round I played was against Josh who ran a yellow deck that refused to die. His deck revolved mainly around getting his higher level Digimon out right away instead of digivolving and although this gave me a lot of memory to work with each turn, I could not make it count. The cards in my deck were not the type that did well against a deck like this, as they targeted weaker Lv4 and lower Digimon. My hands became full of cards I could not use, and although I did fight back quite a bit, the power of yellow kept his security stack quite full.

After the matches with him he gave me some advice on how I could make my decks better. He told me that most people try to get big guys out right away so all the cards that target smaller guys are getting in the way. He also showed me some of his cards in his deck that I could add to make it more aggressive. I have already ordered some of the cards he suggested to try and make my deck better.

Overall this was a really pleasant experience. I assumed beforehand that everyone was going to bring super meta decks and be really uptight and serious. Everyone was really friendly and it felt like I stumbled upon a nice little community of players that challenge each other and help each other grow. And even though I lost all my matches, I got a card for participating and I had fun. I call that a win for now. 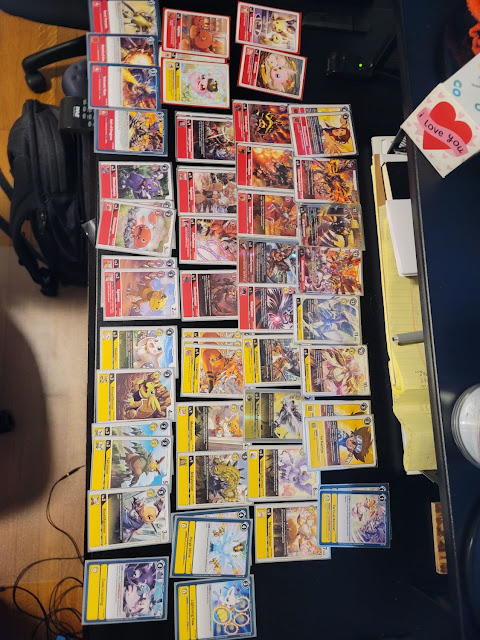