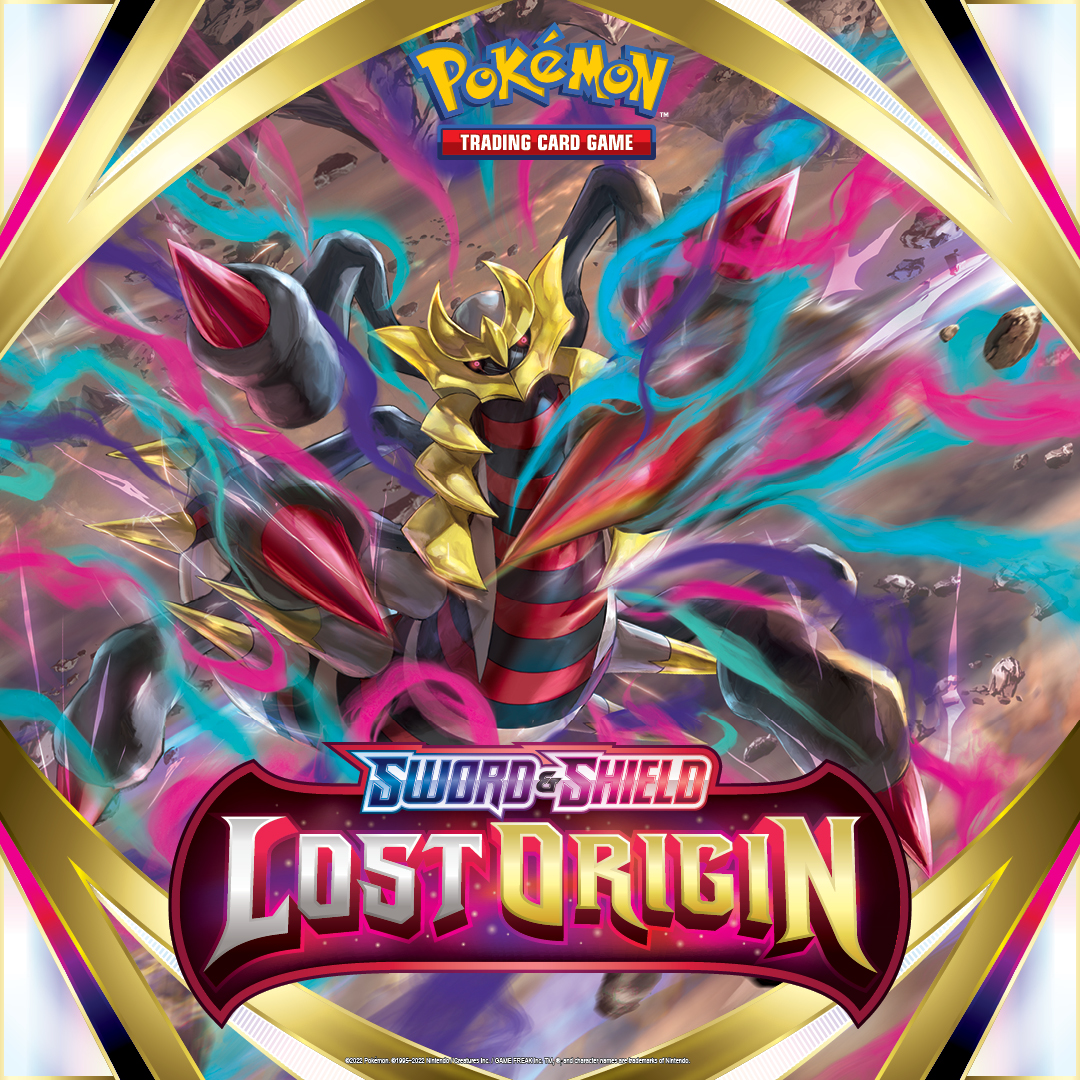 Lost Origin is dropping this Friday, 9/9, and I thought it would be fun to detail some of my faves from the forthcoming set.

These selections are purely subjective, mostly chosen on the bases of what I can use for my current and future decks – first – and the overall meta, second.

A quick bit of housekeeping: If you weren’t already aware, Lost Origin is bringing back the Lost Zone mechanic to standard play. The Lost Zone is a secondary discard pile that cards will be able to use to satisfy various effects. The effects will range from modifying attack damage to energy acceleration. But true to its name, anything cast to the Lost Zone is permanently discarded. No recovery is possible – at least not yet. Though counting your discarded cards will be a necessary part of calculating the cost for activating card effects. In most cases, you’ll have to have a certain number of cards in your Lost Zone to activate trainer and Pokémon attack effects.

The last time we played with the Lost Zone mechanic was in the Ultra Prism days of the Sun and Moon block. As a nice update, this returning discard pile will be a lot more active in your board state.

There are a few objective Lost Origin all-star staples that will impact the standard format for the foreseeable future, cards like the Giratina V line, the Zoroark V line, Comfey, Colress’s Experiment, Mirage Gate and Lost Sweeper. These should be on every player’s set wish list so they don’t need to take up room for this read. Now for my selections! 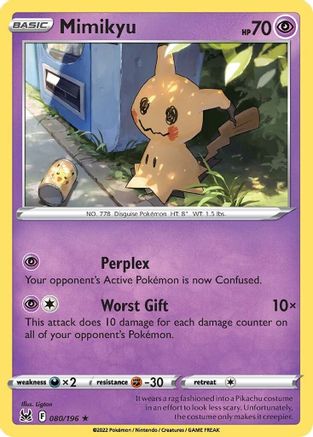 Mimikyu: If you know me by now, you know I love racking up damage mods in creative ways. It’s why half of my decks are usually some version of snipe and spread as primary modes of attack. The Lost Origin Mimikyu card has its Worst Gift attack – capitalizing on the damage counters on all of your opponent’s Pokémon. The potential is huge, but you would need a way to consistently place damage counters on your opponent’s side of the field. Though it could also be a decent surprise revenge attacker the way that the Rapid Strike Basculin punishes you for surviving hefty attacks.

I would love to fit Mimikyu in my Orbeetle VMAX deck, as its Eerie Beam ability is a fantastic and consistent set-up for Mimikyu’s Worst Gift.

Of course, Mimikyu can already slide into the Shadowrider VMAX and Mewtwo VSTAR decklist, given the shared typing.

I’m also thinking Mimikyu could be the card that gives Dragapult VMAX a new jolt of vitality since that deck was always (placed) damage counter oriented. 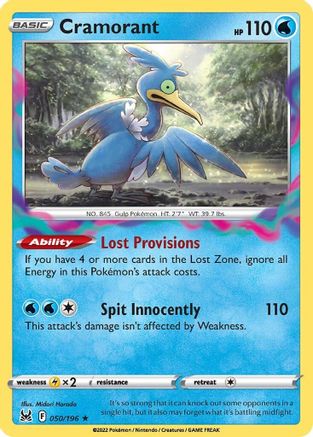 Cramorant: You kind of can’t mention Cramorant without acknowledging the deep staple potential of Comfey. Like Trekking Shoes, Primate Wisdom Oranguru, and even the Amazing Rare Jirachi, it pays to maximize your draw power with abilities. They make your decks significantly more consistent and they are good set-up or stall cards to force your opponents into seven-prize games. Comfey’s Flower Selecting ability will be the easiest way to integrate advantageous Lost Zone effects into your deck without making the mechanic the primary engine of your list.

Now enter Cramorant. When only four cards are in the Lost Zone, its three-energy Spit Innocently attack becomes a free move that no longer requires the three energies. This makes Cramorant potentially splashable in many decks, assuming lists start including one or two Comfey’s to round out the decks’ consistency. 110 damage is usually a small amount, but for an alternative cost that keeps energy use low for critical moments, Cramorant becomes vastly more compelling as a two-hit-ko partner. 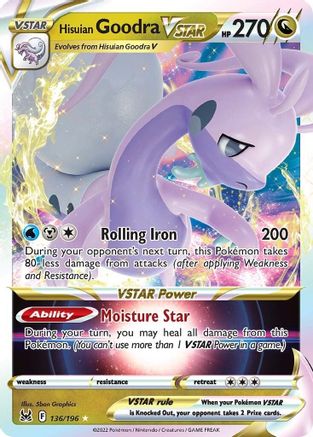 Hisuian Goodra VSTAR: This Rule Box beauty will be the spiritual successor to my Stonjourner VMAX deck. Goodra is not naturally tanky like Stonjourner but it has an attack and a VSTAR power that allow it to function like it has 330HP.

Rolling Iron protects you from the full might of your opposing Pokémon’s attacks the following turn. With 80 damage resistance, your opponent has to clear a wall of 350HP to one-hit-ko Goodra! 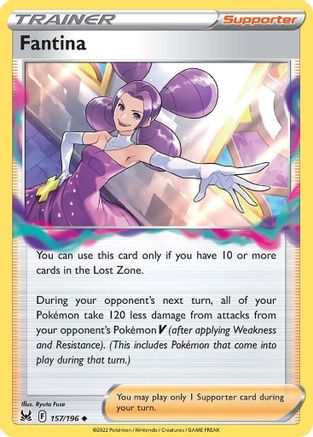 Adding to your defense buff is a VSTAR power that heals all of Goodra’s damage. You also have the Fantina supporter that increases your resistance by another 120, making your Goodra immune to 200 damage for the following turn. AND the new Lake Acuity stadium gives any Pokémon with a fighting or water energy attached to it an additional 20 damage resistance. With a shield of 220 damage resistance, your Goodra should stand pretty tall to take some consistent knockouts. The icing – no weakness for this sludge dragon.

Admittedly, Fantina could be hard to pull off every turn, since it is a supporter card and you’ll likely want to play a Boss’s Orders or something for draw support eventually. You’ll also need 10 cards in the Lost Zone before its effect is active. But since it gives all of your Pokémon a defensive buff of 120 less damage from V’s, it still makes its inclusion in any Hisuian Goodra V list a no-brainer.

I’ve already gotten my honorable mentions out of the way, regarding all of the necessary trainers to use for my Pokémon picks, but here are a few more: 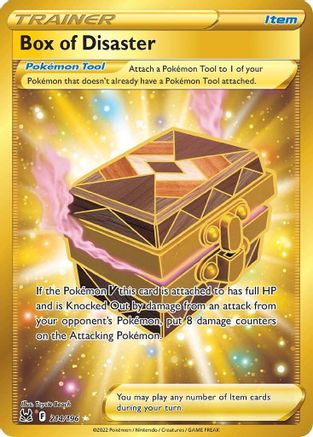 Box of Disaster: I instantly thought about my Pachirisu tool drop deck that uses Honchkrow V’s Boss Pockets ability to give Pachirisu’s attack a more competitive dimension. Equipped with Box of Disaster, Honchkrow is a lot less passive as a perpetual liability that is just in the deck to increase Pachirisu’s damage output. Conditionally, Honchkrow does have to have its full HP for Disaster to fire, but it will likely be a one or two of in the list. 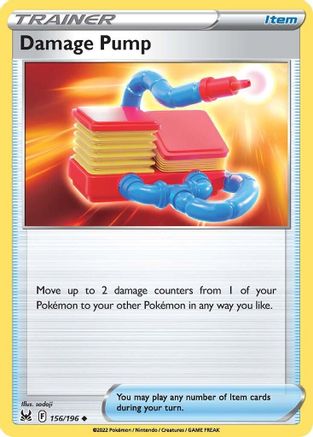 Damage Pump: I am quite fond of this card, or more so its potential. It’s going to make a few creative lists that will be established spicy meatballs in the meta. It works most notably with Zoroark VSTAR’s Ticking Curse attack. But it will also give Radiant Heatran some efficient legs to stand on. This way, Heatran can be less delicate about receiving enough damage to stay dangerous, but not be knocked out. And Pump might give Gyarados VMAX more helpful support that should further increase its visibility as a worthy partner for Arceus VSTAR.

Here's to hoping Pokémon makes this damage-moving effect a wider one that will force players to overhaul the mainstream spreading and snipe routes of attack.

I could probably talk at length about this hefty expansion. The trainer gallery is the best one yet since they started with Brilliant Stars. And the GLC format has some new players, to be sure. Last honorable mentions – baby Hisuian Goodra is a rogueish way to update Zacian V lists (which I love) and it may also make a fun deck out of Galarian Stunfisk V.

Let us know what your must-haves are for Lost Origin. Looking to stomp up your tourneys with the meta-commanding Giratina VSTAR or will you refresh your lists with some Lost Zone support? Whatever your choices, may the shenanigans be ever in your favor.