Showing posts from January, 2023
Show all

Reporting on my Latest GLC Competition 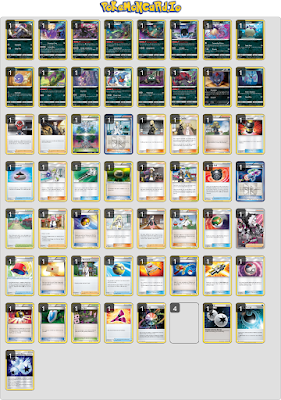 A GLC article by Nikki Xaysanasy The Gym Leader Challenge, as a format, has been growing – especially since Pokémon’s governing body recognized it as an alternative TCG format. It's being played online, via webcam, at locals – it’s also an established side event at major tournaments. It surely was at the San Diego Regionals I attended earlier in January. To learn more about the format, visit the GLC website at https://gymleaderchallenge.com I am planning on hosting a seasonal league for GLC online, once Pokémon TCG Live is officially released from its current beta rollout and everybody migrates over. Live’s crafting system, in which you can "buy" your own cards, will make it easier for players to get into GLC. Fortunately, almost everybody's collection from PTCGO will port over so players will not have to restart their digital collections. I played in a weekly event recently. Read below for my progress through the pairings ladder. Tournament: Gym Leader Challenge Wee
Post a Comment
Read more

By Elijah Douresseau The Pokémon Regionals took place at the San Diego Convention Center between January 6th and 8th. As the very first regional event of 2023, and the last to occur before Crown Zenith releases, the timing of the weekend could not have been more interesting. Versions of Lugia VSTAR and Lost Box were suspected to be the most visible in SD, with Mew and baby Regis bringing up the rear. And to no one’s surprise, this was the meta for the weekend and the decks to beat to make it to day two and beyond.  The SKYNITE Pokémon TCG Team showed up with a diverse deck list arsenal. I played my trusty Rapid box deck. I felt the most comfortable piloting the deck in a variety of situations. And I had the most hours logged with the list, even after integrating meta tweaks. The Junior in our squad played the tier-one Lugia list. And another player brought Eternatus VMAX, which actually had a fairly sizable presence beyond what I guessed beforehand.  My Rapid box and Eternat
Post a Comment
Read more
More posts